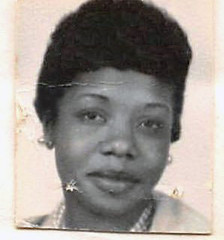 Some of my earliest memories of my mother are of her baking homemade biscuits, the sweet smell of yams and her singing.  While we had physical similarities, my mother and I had distinctly different tastes.  I suppose like most mothers and daughters, we disagreed on subjects ranging from our favorite movies and music to social justice issues.

Perhaps the only thing my mother and I could agree on was that she was fierce and fabulous.

Born in a one room shack in the woods of Fairfax County, South Carolina to a curious autodidactic farmer and a proud domestic cook and explorer, Tattee (as she was called by her siblings) came into the world during the middle of the Depression with a defiance that would not be tamed.

A mother at age 15, she knew she could make a great life for herself. She felt it in her blood. At age 16, she married a WWII veteran and they began their migration up the mid Atlantic to the North in search of opportunities for their growing family.

When she and her family arrived up North, they found home in a small tenement. While living in a tenement could be enjoyable at times, she yearned for a different living space.  Through Jim Crow and segregation, Tattee remained determined to live life to its fullest. By the time Tattee was 25 years old, she had 5 children and was eager for challenging work.  When her children came home from school, she studied everything they learned that day.  She continued her education, went back to school and became a cosmetologist.

Tattee did not believe in just surviving...she believed in flourishing. Tattee was further motivated by the changing times. While many of that period thought that it was unusual for a wife and mother to seek independence, Tattee knew that every human deserved respect, dignity and freedom.  Her fierceness, faith, courage and defiance enabled her to start a business, and purchase her own home for herself and her youngest children.

If you were to ask Tattee what kept her going and helped her endure that which would have broken even the strongest of warriors, she wouldn't think of her struggle and triumph as anything unusual, she would probably throw her nose in the air and say, "Life is going to happen. People will try to push you around. It's how you respond to it that matters.  I'm just as good as everyone else." She would also say it was her faith that kept her going.

Without a headstart, in the face of racism and sexism, and every other type of -ism imaginable, Tattee realized what many people never do...ultimately, we have the power to make our own story.

Tattee would say that she was not perfect.  This is not intended to lift Tattee to sainthood, but to honor the blessing of being able to shape our own story. These wearable art pieces are in honor of the power that every one of us have, but seldom realize. Tattee realized it, tapped into it and let that power manifest and shape her life's story.   She is the American story of defiance, faith, spirit, love and fabulous fierceness.  She is the true American legend.  She inspires and encourages us all to tap into our own power, defiance, love, and faith.

Promote all of those positive aspects for your life and legacy to continue to build a country and world of talent, taste and celebration of realized power.

TatteesTastes are statement pieces for people who understand the odds, defy them, and manifest their own story.